Soppressata di Calabria: a history of delight and flavor 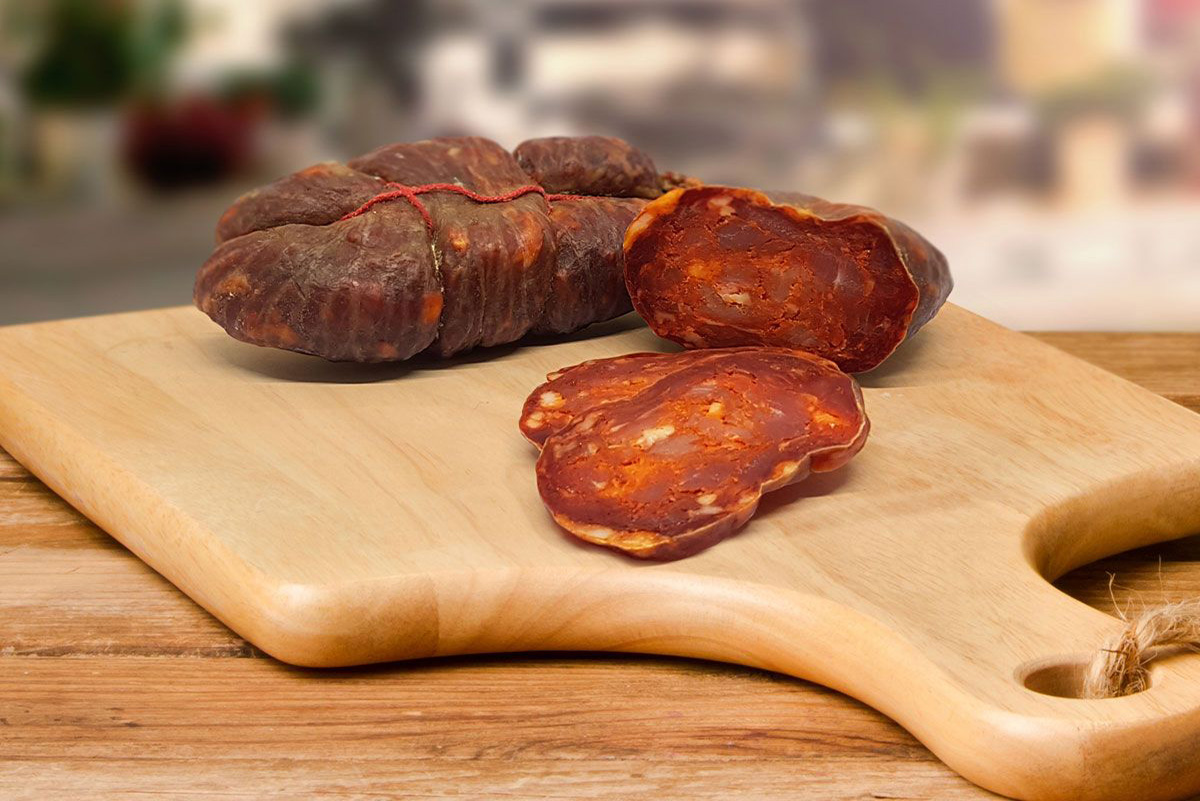 What is Soppressata? History and curiosity

Soppressata, also called suprissata or suppizata, is one of the finest salami of the Calabrian culinary tradition, one of the four to have obtained the PDO recognition and is probably the one that best represents the idea of hospitality in Calabria. There is no family that does not welcome a guest without pulling a soppressata out of the pantry, slicing it and offering it almost as if it was a welcome gift, in a sort of ritual that has been going on for a very long time.

Soppressata is a particularly savory Calabrian sausage, with an aromatic and strong taste obtained from the processing of the finest parts of the pig: ham and shoulder, more rarely fillet. Compact in appearance, slightly flattened and soft, it is defined by a uniform and lively red color, which varies depending on the spices used to flavor it. There are therefore three types of soppressata: the white, containing only black pepper, the sweet, with sweet red pepper, and the spicy, recommended for those who love particularly strong flavors and hot pepper.

The origins of this typical salami are ancient, like most of the products of the peasant culture, and there are two hypotheses about the origin of its name. For some people, it is a derivation of the Italian verb soppressare, which means, "to press" and "to tighten", and in fact, Soppressata comes in a slightly flattened shape that derives from the tradition of pressing the salami, putting it under a weight during the phase of drying. According to others, the name derives from the contraction of two words of the Calabrese dialect: susu meaning "above" and mpizzare meaning "to hang". From this the meaning "hanging up" and in fact this salami is hung from the ceiling beams during the curing process.

How Soppressata is produced: ingredients and processing

The processing of Soppressata can be different depending on the production area and today it is still prepared at home, as tradition wants. It is an art handed down from father to son and, while maintaining a common base, each one puts his own, giving soppressata their own personal touch.

Calabrian Soppressata is the only one to have obtained the Protected Designation of Origin (PDO). To be able to fit into this type of product, each phase of the processing must satisfy a series of requirements, ranging from a well-defined production area, to the selection of raw materials, processing method and curing.

In order to be defined Soppressata di Calabria PDO, it has to be processed from the meat of pigs born in Calabria, Basilicata, Sicily, Puglia and Campania and bred in Calabria from the maximum age of four months. Slaughter and processing phases must also take place in Calabria.

The selected pigs must have the quality mark "pig raised in Calabria", be aged not less than eight months and weigh more than 140 kg. The meat used is carefully selected and obtained from the ham and the shoulder of un-frozen pigs, the fat instead comes from the lard of the front of the loin, in a percentage ranging from 12% to 15% for every kilogram of meat processed.

The mixture of meat, minced in medium cut together with fat, is carefully spread, salted and flavored with black pepper, red pepper or small amounts of Calabrian pepper powder, depending on the type of Soppressata that you intend to produce. The dough is finally stuffed into a natural intestine obtained from the intestine of the pig, pierced and tied by hand with natural twine, and then left to dry for about two weeks.

The cured meat, with a cylindrical shape about 15 cm long and 6 cm in diameter, is placed on a table and pressed for about a week, to facilitate the water outlet and obtain the characteristic slightly flattened shape. The curing process can vary according to the climatic conditions but generally it is left to age for a minimum of forty-five days up to a maximum of seventy.

There are two ways to preserve Soppressata: the first is ancient and strongly linked to tradition, and consists in dipping the cured meat into the lard of the pig and storing it in special terracotta containers. The latter is a more modern and certainly more practical method, and consists in placing the salami in vacuum packs.

How to eat Soppressata: tips and recipes

Soppressata is a true delight of the Calabrian tradition. It is a genuine product with an intense taste that often does not need to be combined with other products to express its incredible flavor.

It can be enjoyed alone, simply by accompanying it to slices of homemade bread, but it is also very popular as an appetizer, possibly inside a rich charchuterie board of typical Calabrian products, made up of other cured meats, cheeses and preserves in oil. It can also be used as an ingredient to fill sandwiches, pizza and focaccia or to enrich various dishes of Calabrian cuisine, such as sauces and parmigiana.