Pancetta di Calabria: how it is made and the best ways to taste it 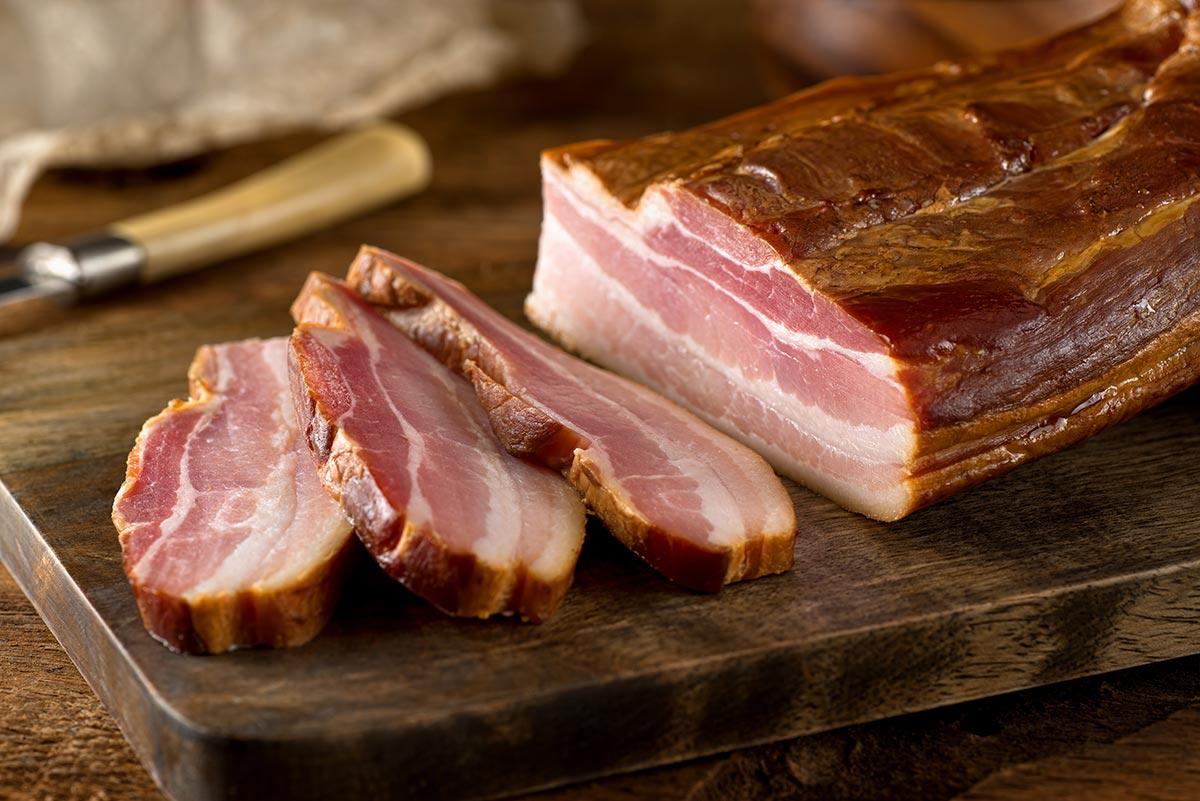 Pancetta is a cured salami with very ancient origins. It was already present in the diet of Roman legionnaires who received a ration of bacon every 3 days. Other testimonies show that pancetta was widespread among the Lombards. This type of salami has spread throughout Italy with different forms and ways of production: taut, spicy, sweet, rolled, coppata and smoked.

How to make Pancetta

The raw material used to make pancetta consists of the front part of the pork rib. This cut of pork is characterized by layers of fat and lean meat that give the product its typical red and white layers. The preservation of pancetta is guaranteed by salting, which is carried out by hand, and consists in putting the meat in contact with a wisely dosed blend of salt, natural flavourings and other spices. This phase is the most important in the production of pancetta and is carried out dry by qualified personnel. After salting, pancetta stop for at least 15 days in cold storage and then it is hanged.

In the traditional preparation, cold storage was obtained naturally because all cured meats were made during winter months. During the first 15 days, massages are made to let spices to penetrate inside the meat and give more flavour to the final product. Before the eventual roll-up, pancetta is trimmed to remove excess fat and to give a compact shape. Rolling is a very delicate operation because it must allow the various parts to melt and above all, it must not let air pass between the parts, which would compromise the seasoning and could make the whole product spoiled. Ligature is a manual operation that requires strength and precision. The parts in which the rind is not present are covered to avoid contact with the air. The last phase is that of maturing that lasts for a period of no less than 2 months. While the pancetta ripens, there is perfect cohesion between the fatty parts and the lean parts.

As a demonstration of this age-old tradition, pancetta is recognized by the European Union with the PDO (Protected Designation of Origin) label both with the Pancetta Piacentina and with the Calabrian pancetta. These two types of pancetta differ considerably.

Pancetta Piacentina is rolled up while the Calabrian Pancetta is taut and rectangular but also the taste is very different: sweet the first, saltier and spicy the second. The substantial difference is due to the type of spices and salting. Pancetta Piacentina is flavoured with salt, black pepper and white pepper, cloves, while Calabrian Pancetta is prepared with salt and Calabrian chili pepper (powdered or ground) with the chilli pepper seeds well visible on the surface. The salt and pepper mixture is first spread non the rind and then on the meat, periodically massaging in order to let the flavour penetrate deeply. The maturation is over 2 months, almost the same for these two types of PDO pancetta, another substantial difference is related to consumption.

Once the maturing phase is over, the product is ready for consumption but while the stretched Calabrian pancetta is consumed through a cut of thick slices, from 0.5 cm thick, Pancetta Piacentina is cut in thin slices. In this case, it is a matter of taste but it is very rare to find consumers of Piacentina who prefer thick cut slices, while for the Calabrian Pancetta consumers prefer the biggest cut of the slice. The cut if done with the knife must be done on the cutting board and with a straight cut blade, so you should avoid serrated knives that would end up chopping pancetta instead you cut into slices elegant and harmonious.

How to eat Pancetta

Pancetta can be eaten in many ways; imagination is the only limit. It is a type of salami that lends itself perhaps more than others to be used in kitchen, because the fact of being particularly fat allows it to melt through cooking, this gives the dishes a characteristic touch, especially in the preparation of first courses and traditional dishes as fava beans cooked with pancetta.

It is not uncommon to find it today in combinations previously considered exotic: thin and crunchy slices of bacon that surround shrimps for example or seasonal vegetables. Rolls, omelettes, the list of pancetta recipes are so many and even the starred chefs use it more often when they want to season other foods with less strong flavours. Pancetta is an ally that serves to flavour and make many dishes tastier. For someone it can also be eaten as it is, simply with a thin slice of bread.

For someone it is the younger sister of the ham but pancetta, with all its humilty and its strips of lean and fat, excites the imagination of every lover of good food.